A photograph is an aspect of reality, and photography is about drawing a picture with the light of what is in front of the camera at the time.

A system camera is a light-proof box with an attached controllable light source.

The sensor/film is the third leg of the tripod that photography stands on. The first leg of the tripod is the aperture, the control of the intensity of light through the adjustment of the aperture in the lens. The second leg is the control of the time the light falls on the light-sensitive surface through the adjustment of the open time of the shutter. The third leg as said above is the light sensitivity of the sensor/film itself which like the aperture and shutter can also be doubled or halved in sensitivity to light.

The sensor/film is the light-sensitive surface that records the photograph of the subject that is in front of the camera at the time. Like the aperture and the shutter, the light sensitivity of the sensor/film can also be doubled or halved.

The tripod or three leg situation of aperture, shutter speed and ISO in photography gives the photographer a very wide choice of options for a perfectly exposed photograph in any photographic situation.

Photographic Basics is an extract from the first of 18 Zoom.us sessions, John Robinson offers these Camera & Coffee Sessions through his Zoom.us meeting room at R300 per session. Contact John on +27836547789 or jr.photog@icloud.com to book a session with him. 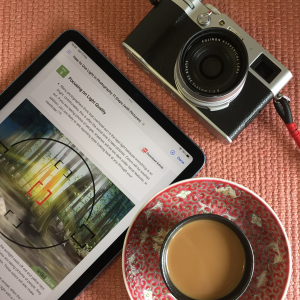