Hats are part of our heritage

I was fascinated by the Netflix Series, ‘Halston’ about the American fashion designer who rose to fame in the 1970s.  He began his career making women’s hats, and in fact the first scene of the series is of him as a child making a hat for his mother in rather sad circumstances.

Halston became the head milliner for the high-end New York City department store Bergdorf Goodman and in 1961 he made the famous pillbox hat that Jacqueline Kennedy wore to the inauguration of her husband, President John F. Kennedy.

Hats are part of our heritage as South Africans

I have only met one milliner – Dolly Sepel. I interviewed her when I lived in Bez Valley 10 years ago. Her shop was around the corner from where I Iived.

Dolly was very old when I interviewed her. I thought she must have died.

But after some recent internet research, I found a blog written by her granddaughter about her wedding: “My veil was designed by my grandmother, Dolly Sepel,” she wrote.  I emailed her and was delighted to receive a very enthusiastic response from her father, Dolly Sepel’s son, Glenn, who said Dolly is alive and well and living in Australia.

I visited the old shop and found that it is now a security company.

Here is the original blog I wrote about Dolly Sepel.

“Whatever I have done is with my own ten fingers.”

I squinted through the metal grid and dark windows of Broadway Milliner for any sign of life but could only make out a few very dusty hats on a small hat stand to one side of the shop window. Inside, Dolly Sepel was working on a new hat. She has been doing this for 48 years.

Women in their sixties or seventies who lived in Bez Valley as children told me they remembered their mothers having hats made by Dolly. “She was famous,” one said. “She made all the mayoral hats.” When I went back to tell them that Dolly is still alive and still working, they were flabbergasted. “She must be nearly 90!”

Most people in the surrounding shops that I spoke to don’t know Dolly. Only the tailor around the corner, Mr. Moti, still chats to her from time to time. “She was a beautiful woman in her day,” he told me.

Dolly grew up in a house in Braamfontein and was educated at the Cottesloe school. Her father worked for the municipality. The family was very poor. “I came from a poor house,” she says. She and her two brothers and sister left school and started working at the age of 16.

When she was in her twenties she had an offer from a draper’s shop in Bez Valley. “There was a draper next door and there was a girl working there called Frances and she said to me, ‘Why don’t you come and work from our shop? We will give you a little corner and you can sell your hats there’.”

It was a large shop that included the shop that is Bez Valley Tailor’s today. “I started with that counter there, Dolly says, pointing to a white wooden counter with drawers, “and where the tailor is today, that is where I worked. That was my place. That was part of the draper’s shop.”

Before she joined the Garment Workers Union, Dolly earned 3 pounds 10 a week. Her wages went up to 7 pounds 10 when she became a union member. She speaks in glowing terms about Solly Sachs, who formed the union in 1928. “He was a wonderful man. He helped us a lot.” 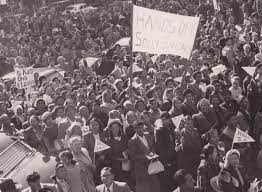 The owner of the building lived with his family in a flat above the shop. As Dolly’s business grew, he built a separate shop for her and two more flats on top of the shops. Dolly dipped into her savings to pay the deposit on a flat and start her own shop. “I had 50 pounds in the bank,” Dolly says. “I was always a saver. I used to save 50 pence a week.”

There was a carpenter next door before the printing shop moved in and a Chinese shop that sold groceries. The Valley Butchery owned by Lilly Green was a block away and there was a big tea-room over the road on the corner. Directly across the road from Broadway Milliners, there was a hairdressing salon. “It was a white hairdresser. Now it is a black hairdresser.”

“There have been big changes since those days,” Dolly says. “There were Italians and Greeks and Portuguese that lived here. They have all left now. It is all black people living here now. I had a very big business but my customers were all white and now many people don’t want to come here. But now I have very rich black customers. I have judges, lawyers, businessmen coming here. I am always busy. I do work for a shop in Sandton. She sells my hats for R 1,500. Fashion changes all the time. Smart women still don’t go without a hat. If you are smart you don’t go without a hat.”

Rentals for shops in the vicinity are approximately R5,000 per month. “I could have bought this building for 55 pounds more than 30 years ago but I didn’t have the money then.”

Dolly has not had an easy life. Her husband was a bookie who contributed little to day-to-day expenses and left her for another woman, and one of her two sons died in the SADF at the age of 22.

She has been making hats for so long that she can’t imagine doing anything else.

“Lime green, turquoise, gold, black and white… You just make things… People bring their outfits for me to match. I dye their shoes, their bags, everything…

I used to work seven days a week. Only the last year I don’t work on a Sunday…

You have done it all your life. You have never done anything else. Most of my life has been in this shop… I used to work seven days a week. Only the last year I don’t work on a Sunday…

Whatever I have done is with my own ten fingers.”

Melody Emmett is an independent researcher, writer, editor and workshop facilitator. Her experience as a writer spans journalistic writing, fiction and non-fiction writing, screenplay writing and report writing. She has a long history in the non-profit sector as a human rights activist and researcher, project coordinator, writer and editor. Fields of particular interest include environmental issues, gender justice and mental health.